Profitable Measures Of React Native To Escalate Your Business Strategies Today’s scenario is making mobile applications the major factor in constructing a business, and they can be of both small scale and large scale industry. The applications are merely becoming the crucial decisive factor within the business and their success. The huge strategically evolved features have influenced businesses to involve a mobile application in their performance.

The following step is becoming a prominent segment in their marketing campaign. But generating a mobile application is termed to be a tedious task as there is a lot of creation that a developer has to go through. This long and hectic process also demands a lot of energy, potential, and expenses. But, now the advanced technological factors and ingenious developing qualities have eased the process of forming a mobile application.

Many options are scattered in the market, but the most trending and influencing one is React Native App Development. With the major benefits of React Native, a business can run through all the profitable measures. Let us dive into the aspects of React Native and how it can energize the authenticity of a business with its advanced features.

How Can We Define React Native?

When we prioritize the application development, we majorly process only two things: iOS and Android. The dominance of the following platforms has shown rigorous potential in acquiring a vast number of features, and they also have developed a massive requirement. They have generated the construction process of common apps that can be accessed on both platforms without obstacles.

On the other hand, React Native features are an efficient framework for developing cross-platform applications for both iOS and Android platforms. If you talk to a React Native App Development Company, you will be able to signify its attractive benefits with the advanced technologies infusing the modern and traditional development techniques.

React Native is a JavaScript-associated app framework that will help you facilitate native-looking applications for iOS and Android. There is a lot of vision a business can be profitable, like getting development of hybrid applications with the help of React Native. Let us discuss some of the React Native Benefits For Business.

How Businesses Can Be Benefited With The Usage Of React Native 1. Simplified Development Of The App

All the developers are aware of the simplified techniques that React Native approaches in making the applications. The developers can evolve the complicated terms to ease the process with the help of basic codes. As the framework utilizes the Facebook-initiated UI library, scripting code is an easy task for this framework. The application of ReactJS will also be fascinating for the developers as the code will be determining and straightforward. Due to the functionality of the Hot Reload, the complexity of the framework eases out conveniently.

Achieving various codebases for utilization in different platforms has been eliminated with the usage of the React Hybrid applications. React-Native can be termed as the individual-codebase framework that can be facilitated differently for various platforms. It helps the developers in saving their valuable time. The development time will be reduced, and the hybrid applications will maintain similar functionality and appearance along with the fascinating performance for the desired results in a business.

3. The Programming Model Will Remain The Same As The ReactJS

As Facebook has initiated producing both the frameworks ReactJS and React Native, it will involve all the crucial modules of ReactJS. ReactJS is one of the major libraries for securing comprehensive web development among developers.

4. Vast Support From The Community

Grasping the assistance of 2000 contributors from around the globe, React Native has made its community very strong and appealing. Along with this, significant market leaders such as Call stack, Software Mansion, Microsoft, etc., have contributed to the development of the framework. React Native App Development has prominently shown crucial potential in energizing the range of businesses by giving easy access to all the work.

5. Can Facilitate A Rich Ecosystem

With the usage of React Native, many significant changes have been implemented. Most business sectors have shifted their interest towards React hybrid applications due to its exclusive module library and sourcing nature. Developers can now generate applications with vast influence, and the accessibility remains very authentic within a business.

One of the major advantages of developing applications through React Native is that it can give access to third-party accessibility to broaden the capabilities and experience of the following applications. It can link third-party accessibility within the native module to energize the functionality of a certain device, and the loading factors become significant. If you hire a React Native App Development Company, they will be able to smoothen the operating system.

7. Reusability Of The Code

Usage of the single code is one of the influencing qualities of React Native. The developers will be able to facilitate applications for both the iOS and Android platforms with the usage of a single codebase. It can be the best out of every React Native Benefits For Business, as it will help the developers save valuable time in forming a highly proficient web application.

When a business considers synchronizing several applications, the usage of React Native App Development can be beneficial. It will vitally lessen the efforts of the programmers in creating unique and separate codes for the integration. It can also make the application’s potential user-friendly and accessible.

Most of the developed business sources have adopted the crucial functionality of React Native to enhance their social media platforms with efficient animated components. To enlighten the procedure of the User Interface of an application, it is very important to infuse animations. The animated sources look subtle and attractive, dragging the potential audience’s attention towards the particular business. People will also get interested in watching the characteristics of the application in a fun and creative way.

React Native can be the ultimate solution for constructing user-friendly and hybrid applications. Developers will be able to generate applications that can be optimized quickly, lessen the usage of the memory, facilitate a fetching UI and escalate the functionality of the following app. All types of businesses will be benefited from the major sources of React Native as it will ease the accessibility within the working force. 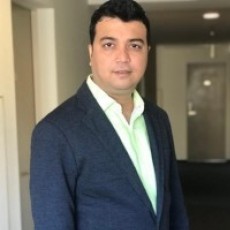 Rahul Panchal, the brain behind this site and a tech geek of a Web and Mobile App Development agency that helps businesses grow through innovative ideas and solutions.

What Is The Future Scope Of React Native For Mobile App Development?